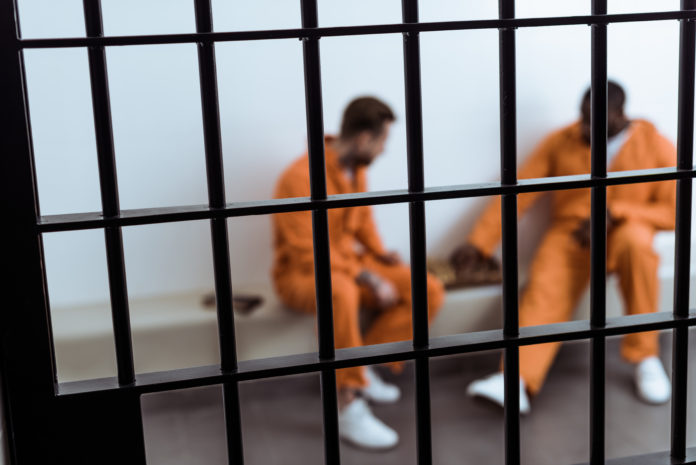 Prisoners in jail (Adobe) On Tuesday, May 8, a South Carolina sheriff and two officers were charged with federal counts of conspiracy, tampering and falsification of records in a federal investigation after allegedly arresting an innocent Black man in 2018. While you would think that this is racially motivated, it appears it is not.

The sheriff, himself, is Black.

According to ABC News, the victim, Kevin Simpson sat in jail for three days after being arrested by Sheriff George Alexander Underwood, Lt. Johnny Ricardo Neal Jr. and Chief Deputy Robert Andrew Sprouse for not complying to their demands to stop recording the aftermath of a car accident on Nov. 20, 2018.

The officials were responding to the accident and was in search of suspect related to the crash. That is when they encountered Simpson, filming the event on Facebook Live on his cell phone. He was standing nearby on his yard in Fort Lawn, WSOC-TV reports.

Underwood informed Simpson to remain on the porch and stop recording. Simpson did not comply, and continued to record. This prompted Underwood to follow Simpson, and the officer ordered Simpson to give him his phone, court documents reveal.

The sheriff then allegedly constrained Simpson, and told him he was under arrest although he did not “enter the roadway or interfere with law enforcement activities,” court papers said.

Court papers say Neal allegedly knocked Simpson to the ground while he was handcuffed, causing him to suffer from head and elbow injuries.

After his arrest, Simpson was taken to jail and stayed there for three nights. Neal reportedly placed Simpson on “hold”, so the arrest processing would be delayed.

The court records further revealed that Sprouse went into Simpson’s house when he learned about the post on Facebook Live and took his cellphone without Simpson being aware or a search warrant.

On January of this year, Underwood and Sprouse allegedly lied to FBI officials about Simpson’s arrest following the news of them creating a false police report. They allegedly lied about the cell phone’s location as well.

Simpson’s lawyer thanked law enforcement for their efforts regarding the case.

“We are appreciative of law enforcement in general and particularly for those law enforcement agencies that refuse to allow the bad apples to survive in the greatest justice system in the world. The FBI and the US Attorney’s office here in South Carolina have acted like true professionals, and we feel confident that the wheels of justice will continue to turn for Mr. Simpson and his family,” Everett B. Stubbs said.

https://thegrio.com/2019/05/09/sheriff-innocent-man-jail/
More in this category: « In campaign fundraising, Kamala Harris is getting minority donors to sign big checks Anita Hill says Joe Biden’s judiciary committee could have launched #MeToo in 1991 »