Just a few hours before President Donald Trump took the stage to address the nation at this year’s State of the Union, CongresswomanMaxine Waters, hosted her annual Millenial Media Row. It was an event created to open up a space between digital media outlets and members of the Congressional Caucus.  “This is perhaps the most important event that we do all year,” she told TheGrio. “The whole idea is,  we got to invite people into this capital that normally don’t get invited into the capital. We want you all to know this is yours too.” Congresswoman Waters, or as we affectionally know her as “Auntie Maxine”, is not afraid to voice her disapproval towards the President and she has been a driving force behind his impeachment.

President Trump was recently acquitted by the Senate after being charged for two articles of impeachment: one for abusing his power and the other for obstruction of Congress.

“He is so disruptive, so dishonorable that he should be impeached. As a matter of fact, the House of Representatives did impeach him. I believe it was December the 18th, about 8:20 in the evening. We voted to impeach him. We sent it on over to the Senate. They have been intimidated by this president. They don’t want to stand up to this president. They don’t have the guts to do what America needs. And so whatever he says, just dismiss it as another lie,” Waters said.

Auntie Maxine is not the only one fighting to get the president out of office. TheGrio spoke with other members of Congress about their current views of the president, especially his case of twitter fingers.

President Trump has become notorious for voicing his opinions and thoughts on twitter, and we brought up some of his latest tweets to the congress members to get their initial reactions and their take.

My Approval Rating in the Republican Party = 95%, a record! Big Iowa win. Approval Rating overall = 53%, a new high. With our great Economy and other major successes, would be 20 points higher without the phony Witch Hunts and Hoaxes???

“So ninety-five percent is very suspicious,” Congresswoman Gwen Moore told TheGrio. “It is so sad to see people who are very decent people are abdicating their own moral conscious, their own intelligence. For this president who is corrupt, who’s abused his power, who has questionable mental health and has no values. It’s sad for our democracy.”

Wall is moving along strong, tall and quickly. Thank you Jim for all of your help! https://t.co/1dlC0dZ0ui

In response to the Wall tweet, Congresswoman BarbaraLee called out Trump’s bluffs “Another lie. What can I say? He just lies, lies, lies.”

And of course, we couldn’t leave out President Trump’s infamous error on what state Superbowl Champions the Kansas City Chiefs were based. He mistakenly tweeted and deleted Sunday, that the Kansas City Chiefs represented the Great State Kansas very well, not realizing that the team is based in Missouri. Although, the tweet was deleted social media users were quick to screenshot and blast Trump. 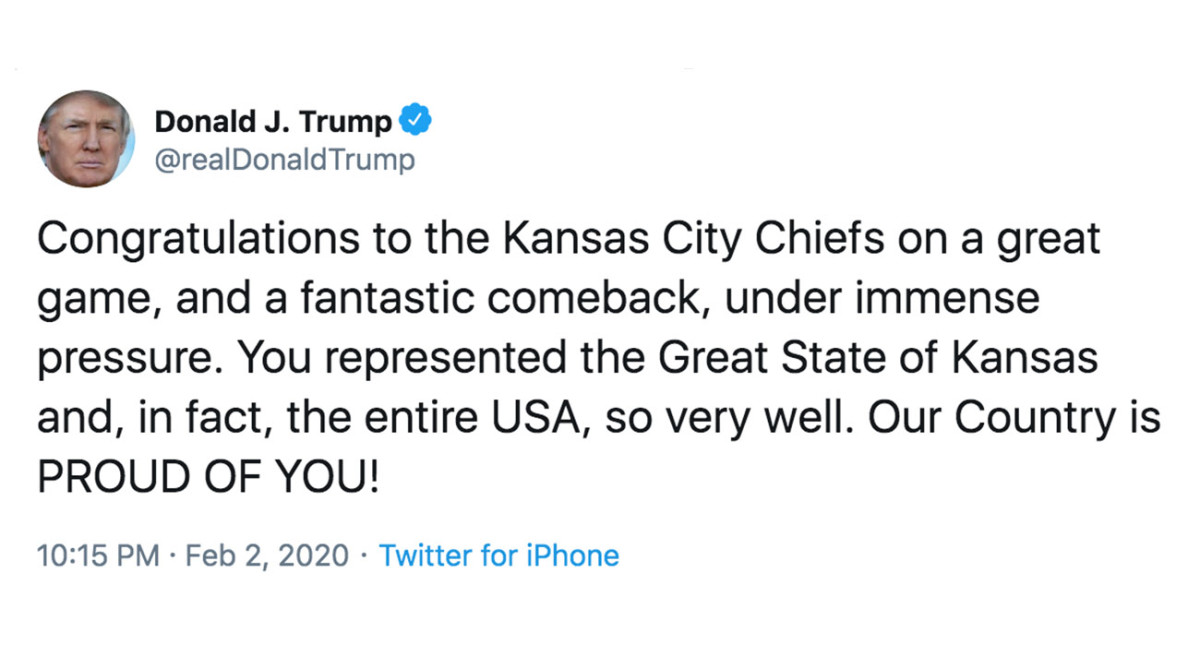 “Let me introduce you, Mr. President, to a map and give you a geography lesson 101. Or perhaps you could actually check with your staff before hitting post because Kansas City Chiefs play in Missouri. Duh.” said Congresswoman Debbie Wasserman Schultz.

The list of tweets from President Trump goes on and on, and the congress members were not holding back with their responses to the Commander in Chief.

The full digital story “Trump Tweets” can be found above.

https://thegrio.com/2020/02/09/watch-congress-members-respond-to-president-donald-trumps-tweets/
More in this category: « Trial Begins for Tennessee Man Who Prosecutors Allege Wanted to Kill ‘a Minimum of 10 White Churchgoers’ In Retaliation to Charleston Church Massacre Pete Buttigieg campaign claps back at Biden’s ‘attack’ on his race record »