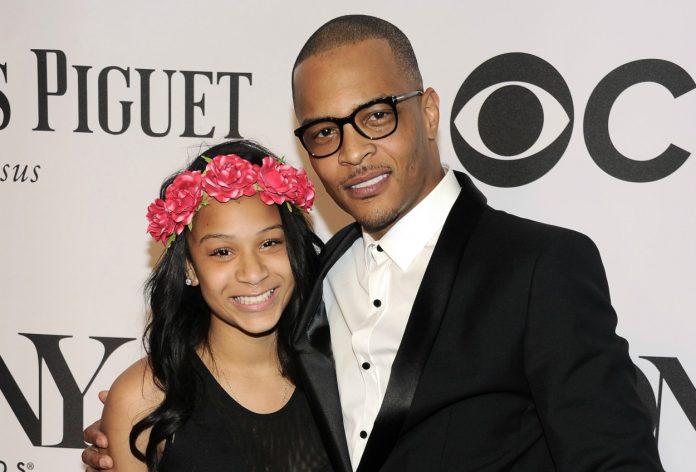 Deyjah Imani Harris, left, and T.I. at the 68th annual Tony Awards in 2014. (Photo by Charles Sykes/Invision/AP) Recenly, rapper T.I. has sparked public backlash after admitting in an interview that he accompanies his 18-year-old daughter Deyjah Harris to her gynecologist to make sure her “hymen is still intact.

” Now the 18 year old at the center of this heated debate has been spotted in Mexico with the daughter of another famous rapper.

According to The Blast, a series of social media posts over the weekend have captured Harris spending time with Lil Wayne’s daughter, Reginae Carter while she and her family are vacationing in Mexico.

READ MORE: Why T.I. and fathers like him must stop policing their daughters’ and wives’ sexuality

Although no one from the family has formally addressed the outcry from fans, pictures and videos on Instagram confirm T.I., and his wife, Tiny are currently on a group trip celebrating singer Monica and Toya Wright’s birthdays.

Despite reports that Harris, 20, has unfollowed her dad, Tiny and stepsister Zonbnique Pullins on Instagram, while also liking a series of tweets that call her father’s actions “disgusting,” “possessive” and “controlling,” she still opted to join the family for this gathering.

In the clip in question, Carter apparently decided to film an impromptu dance session underneath a canopy on a beautiful night in Mexico and just when the chorus of the song she’s playing comes on she alerts the other ladies in attendance, “Here we go!”

READ MORE: T.I. says half of his wife’s private parts belong to him

Harris then starts backing it up while her girls sensually dance along with her. She appears to be down with the free spirited moment at first, but hesitates when she notices the camera.

“What is this?” she asks as she points to Carter.

“What is this?” she repeats again before quickly pushing her way past the dancing group to exit the shot.

Check out the awkward moment below.

When In Mexico ??‍♀️

https://thegrio.com/2019/11/11/t-i-s-daughter-deyjah-spotted-partying-in-mexico-in-wake-of-hymen-gate-backlash/
More in this category: « Tiffany Haddish Set to Face Off Against Ex-Husband in Court Over Her Claims in Memoir of His Abuse Atlanta-based Black women in TV & film unite to form #TheReelDivas »